Rogue: The Sons of Dusty Walker 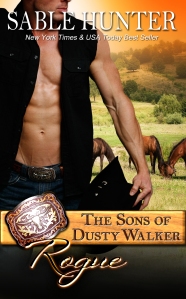 A loner by choice and a renegade by nature.
Rogue is living up to his name. He’s lived life on his own terms, doing everything from team-roping in college, Texas Hold ‘em champion to founding his own company, Lone Wolf Oil.

Everything he’s accomplished has been in spite of Dusty Walker, a man who sired four sons by four women – none of them his wife. Rogue might be following in his father’s footsteps, but he is nothing like his father.

And he never will be if he can help it.

When he flies to Kansas for the reading of Dusty’s will, three brothers and a quarter interest in a half-billion dollar business aren’t all he finds…Rogue feels like he’s been hit by a tornado after he walks into a room and finds a woman in his bed. Not just any woman, either…

The last time he saw Kit Ross, she was racing off in her truck leaving him naked and hard by the side of the road. Of course, he deserved it; he’d hurt her. To say she wasn’t happy to see him was an understatement. And when he wins her ranch with a good poker hand, the game is on.

It’s not just poker that’s being played. They can’t keep their hands off one another. Rogue doesn’t know if he has room in his life for family and love. He doesn’t know if he can be trusted with people’s hearts and happiness. What if he’s more like Dusty Walker than he ever knew?

The Sons of Dusty Walker. Four brothers – one tainted legacy and a wild, wild ride.

Happily-Ever-After or Wedding Bell Blues? The Lone Wolf, Rogue Walker, isn’t alone anymore. Not only has he been reunited with the love of his life, Kit Ross – he’s found a family, three brothers and a legacy left him by his father, Dusty Walker. Everything seems to be perfect. Kit has agreed to marry him and she’s having his baby. What could go wrong? Well…everything. Just as soon as all the pieces have fallen into place, all hell breaks loose. Someone is out to destroy Rogue and take away everything he values, starting with his very identity.

Kit knows Rogue Walker is her destiny. The love and passion that flows between them is all-consuming. To begin their lives in style, she plans a surprise wedding and a hot-as-hell honeymoon. If sex were the only thing they had to worry about, their lives would be perfect – because these two can burn up the sheets like nobody’s business. Alas, there’s more to marriage than sex – who knew? Especially when there seems to be more than one bride. Will the real Mrs. Rogue Walker please stand up?

Despite the seemingly insurmountable circumstances, true love will prevail – not only for the Walker clan but for another couple who has found their way to Red Creek, Kansas during this season of miracles – and believe you me – it’s going to take a big one to straighten out all of this…
**CONTENT WARNING: Contains adult language and sexual situation. This book is intended for audience 18+ ONLY**